The city is not spread out very far but at the moment with lots of construction going on the traffic during rush hours can be quite slow. Depending on where you will study or work in Rotterdam it might be a good idea to live at least somewhat close by. If you have never been here or don't know the city, here is some quick info on the different district of this beautiful harbour city.

Let's say you are a student at Erasmus University or Hogeschool Rotterdam. Both of these Universities have locations in the east, Kralingen, and the city center, Cool District. Kralingen is a nice mix between students and some wealthier streets. Many student houses are located around the area of "Kralingse Zoom", the main university campus. You will be living close to the largest park/lake of Rotterdam, Kralingse Bos. In the summer this is the area for BBQ, some light sailing or just a swim. That being said the area is not the cheapest in the city and finding something decent, especially before the start of a new semester might prove difficult. Plan and search in advance!

The Cool district is the shopping and tourist center of the city. Most of the attractions you will find in tourist guides are located in and around this area. If you are the type of person who wants to live right on the city's heartbeat this is the place for you. With more and more high rise buildings being built in the district, a lot of properties are usually available for purchase or rent. Just like Kralingen however, this is not a cheap area. If money is not an issue and you want to have a nice view Cool District might be for you.

Another district with modern architecture and high rise buildings is Kop van Zuid. Located just across the Erasmus bridge it is home to many large companies like KPN and Unilever. Unmistakable is "De Rotterdam", flanking the Erasmus Bridge it is one of the largest buildings in the Netherlands. There are some affordable accommodations in this district, but remember you will most likely have to cross one of the two bridges to get to the university locations. During rush hour this can take quite long if you want to travel by car. Bike or metro is the way to go across the river.

If you don't want to live in the bustling center, one of the surrounding districts might be for you. For students the eastern districts of Cappelle aan den Ijssel or Prins Alexander are very convenient. You give up on the proximity to the city center but you will save a pretty penny on rent. Since these districts are a bit outside the center they have their own commercial areas, so you won't miss out on anything there. If you are not a regular party goer or don't mind biking 20mins to be in the center this is a good area to live as a student.

Lets move on to Noord and Blijdorp districts. They are located just above the central station and very close to the city center. Its affordable, has good public transport, is not far from the center. Only downside is that it is quite far from the Kralingen university location. You will also live close to the Blijdorp Zoo if you like animals.

What if the Rotterdam housing market is just too difficult and expensive? If you don't mind traveling a bit for university then Schiedam or Feijenoord are good options. Schiedam is located on the west of Rotterdam. Public transportation from there is quite good and housing is more affordable there. Depending on the exact area in Schiedam you might give up on some of the cleanness and neatness of most of the rest of Rotterdam. Feijenoord is below Kop van Zuid, extending far south-east. Originally it developed as a worker district for the harbour. Housing is therefore not quite as nice and modern as some other parts of the city. Rooms here are considerably cheaper than in the center though. Again, depending on where exactly you live and work, your commute might take you quite a bit of time.

We have apartments or rooms for rent at all of the marked locations below. Often there are multiple listings at the same address or very close together. 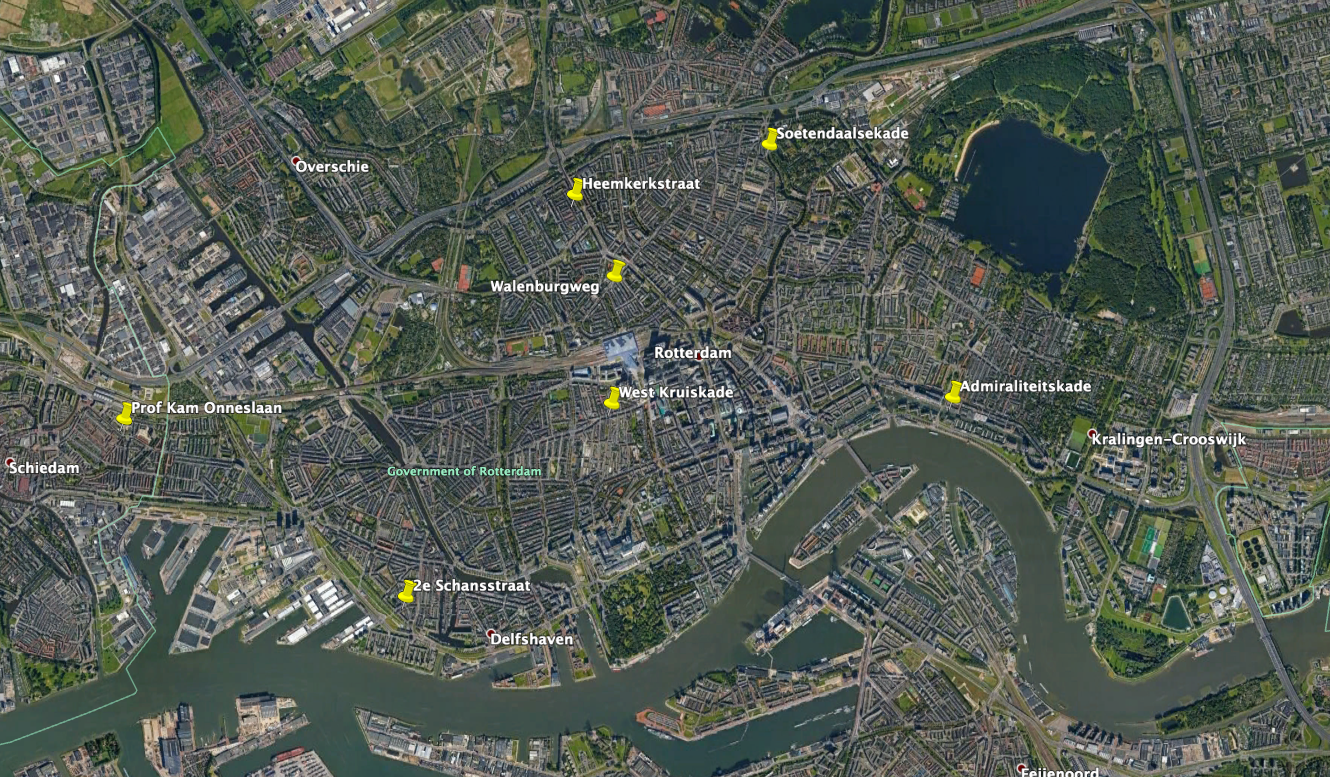